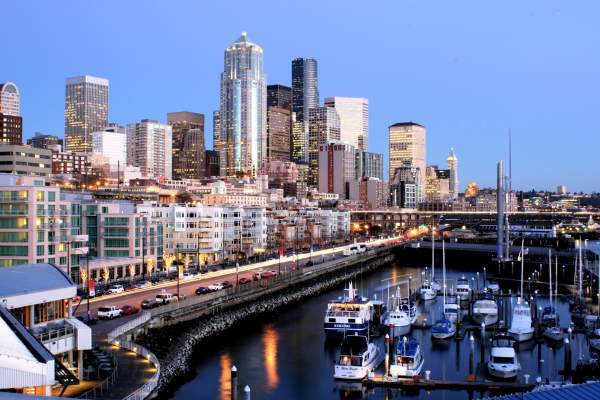 Things To Do In Seattle – 10 Premier Attractions

Once the land of the Native Americans, Seattle is rich in its natural beauty. Nonetheless, it is not far from civilization and sophistication. It gives you both the City and the Countryside under one roof. Here’s a list of the 10 premier locations in the “Emerald City.” These are the top choices with locals and tourists.

Established in 1907, this public market is one of the iconic attractions in Seattle overlooking the Elliot Bay. It is spread over 9 acres of land and is home to more than 200 independent businesses. Started as a Farmer’s Market, you can treat yourself to fresh fruits, vegetables and sea food or take home floral bouquets, clothing, handicrafts and locally made jewelry.

The Space Needle is a symbol for Seattle. Standing tall at 605ft, this observation tower was built during the 1962 World Fair. The Observation Deck at 520 ft offers breathtaking views of Seattle by day and night. It is open year round except on special holidays. If you get hungry, you can grab a meal at the SkyCity restaurant.

A recent addition to Seattle, the Chihuly Garden and Glass Center is a phenomenal glass exhibit. It is divided into three sections namely the glass house, the garden and the interior exhibit. You can purchase a combined ticket for the Space Needle and the Chihuly Center to save a few dollars. If you do get a chance, watch it by night.

Woodland Park Zoo is a real treat for nature lovers as it attempts to preserve local and exotic animal species by recreating natural habitats. There are over 1,000 species of animals and birds segmented into various exhibits. There is a nature-themed play space for children called the Zoomazium. You can bring a picnic or eat at the cafes and food kiosks.

This is one of the premier tourist destinations in Seattle not only on account of the art it has on display but also for its stunning design and architecture. A walk here will give you a glimpse of the city, the harbor and the sparkling waterfront.

The Seattle Aquarium near Pike Palace gives you a new way to explore the underwater. The aquarium is home to over 380 species of fish, marine animals and invertebrates. You can see the colorful fish through the underwater dome and pet creatures at the two large touch pool tanks.

This is a government agency that organizes exciting boat rides to tour the Puget Sound area. On board you can grab a hot drink or simply stand on the deck and feel the light sprays of salt water on your skin. You can also take a ferry to Bainbridge Island.

The Hiram H. Chittenden locks popularly called the Ballard locks connects Lake Union and Lake Washington to Puget Sound. The best time to visit is when the fish are going through the ladder. There is a specially designed 21 step structure that enables the fish to transfer from the saltwater to freshwater. You can see the fish swim through the ladder through the glass panels below.

If you are an aerospace enthusiast, this place won’t disappoint. This museum takes you back into history with its 39 full-sized aircraft. There is Boeing, Air Force One, Concord and Connie to name a few. Many of the exhibits are from World War I and II. You will spend hours here without getting bored.

When the climate does not quite favor an outdoor saunter, you can drop in at the Seattle Art Museum. It is quite big in size and showcases amazing highlights many of them belonging to Native American and Asian cultures. Comparatively, it has a smaller collection of European Art.